Handwashing in the Developing World 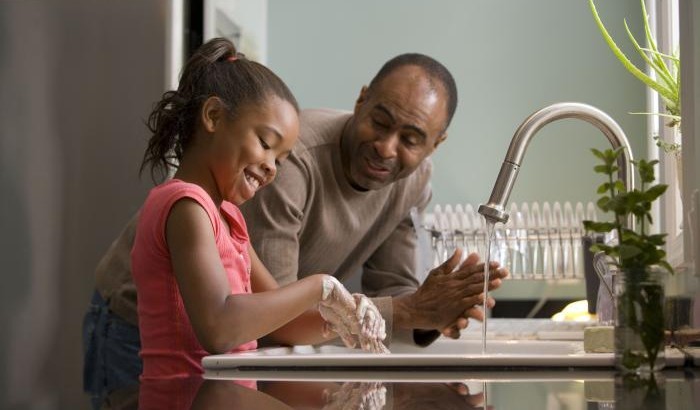 Diarrhoea and respiratory infections remain leading killers of young children in the developing world, and claim approximately 3.5 million young lives each year. The centre for disease Control and Prevention (CDC) has been studying the role of handwashing in preventing these diseases in developing world settings. In a series of randomized, controlled studies of intensive handwashing promotion in Pakistan, CDC researchers found about 50% fewer diarrheal and respiratory infections among young children in low-income households that received weekly handwashing promotion and a supply of soap for about a year, compared with households that did not receive these interventions. The disease reductions were similar whether households were given antibacterial or plain soap.

These studies helped demonstrate that handwashing can prevent spread of two of the leading killers of young children in the developing world. However, although handwashing seems outwardly simple, the habit of washing hands consistently and at the key times can be difficult to form. Additionally, handwashing does require some basic infrastructure: a water source and a hand cleanser like soap, ideally placed somewhere convenient to access during the most important times to wash hands, such as after using the toilet and before preparing or eating food. Establishing and maintaining such infrastructure may be challenging in some settings. Thus, while the type of intensive handwashing promotion used in these studies can be very effective in reducing disease, it is probably not something that can be delivered efficiently to large numbers of people. Furthermore, it is unclear whether handwashing behaviour change or health impacts are sustained after such promotion ends.

As a result, CDC began investigating models of promoting handwashing behaviour change more efficiently in developing countries. Because hygiene habits generally evolve through childhood, and large numbers of children are concentrated in schools, this strategy included studying schools as a site for handwashing promotion. In one randomized, controlled study, investigators compared absenteeism among three groups of first grade students for 5 months in China. One group was exposed to a simple, commercially-developed handwashing promotion program; a second group received the same program, plus a supply of soap for the school sinks, and one child in each classroom served as a handwashing role model for his or her peers; the third group received hygiene education that was typical for the region. Students in the group that received the handwashing promotion program, soap, and peer hygiene role models were absent substantially less than students who continued to receive standard hygiene education.