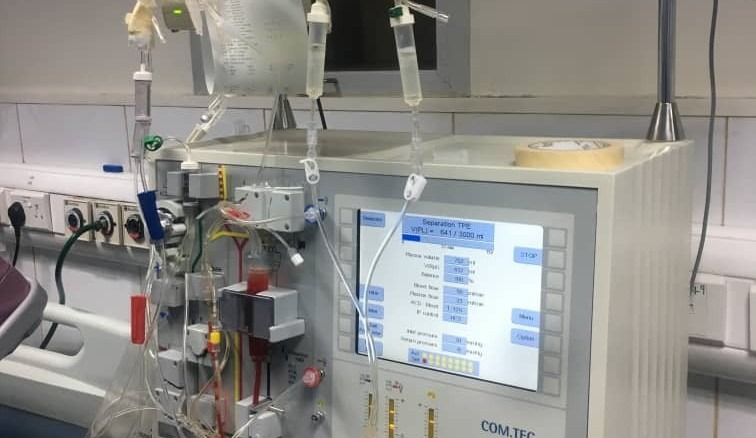 Therapeutic Apheresis is a medical technology in which the blood of a person is passed through an apparatus that separates out one particular blood constituent and returns the blood remainder to the circulation. It selectively removes cells or other targeted abnormal substances from the blood circulation; it is used for the treatment of conditions in which a pathogenic substance or component in the blood is causing morbidity. One of the uses of apheresis is for collecting stem cells.
Blood taken from a healthy donor can be separated into its component parts during blood donation, where the needed component is collected and the “unused” components are returned to the donor.

How do we perform Therapeutic Apheresis?

Therapeutic Apheresis is performed using a machine called a Blood Cell Separator which can separate blood into its various parts. The machine separates and removes the portion of your blood depending on the type of Apheresis you will be undergoing and gives you
back replacement red cells, plasma or other fluids as the case may be. The remaining part of your blood, including red cells, white cells and/or plasma, will be returned to you unaltered during the treatment. A specified component is retained and the remainder is
returned to the individual.

All apheresis procedures have the same basic principles in common – blood is withdrawn from a patient through a needle or catheter and mixed with an anticoagulant (citrate) to prevent clotting.  The blood is then separated in a centrifuge and the target blood components (based on the procedure being performed) are collected and discarded.  The remaining blood is then returned to the patient along with replacement fluids / solutions.

Replacement fluids are given as ordered by the consultant and may include normal saline 0.9%, albumin, red blood cells, and plasma.  All materials coming in contact with the patient’s blood are sterile, used only once and discarded.

Parapheresis consists of the following procedures:-

Side effects of Therapeutic Apheresis

The side effects of parapheresis include, but are not limited to the following:

Please inform the caregiver if any of these occur, as there are adjustments and treatment that can be made to lessen these side effects;

Although very rare, air infusion, bacterial contamination, and/or blood transfusion reactions could occur. The consequences of these unlikely events could be severe and result in death.  Complications associated with transfusions of blood components may include:

Therapeutic apheresis is used to treat patients with a variety of disorders and
has become a relatively common treatment modality.

As pioneers of advanced medical care in Nigeria and driven by genuine concern for the growing healthcare challenges of the people, St. Nicholas hospital offers the Therapeutic Apheresis procedure.